What do they do? Millmerran are polymer engineering specialists based in Devon. Millmerran work with various clients and ensure that confidentiality is maintained at all times.  They work in a variety of fields including product design, intellectual property, tooling design and materials selection. 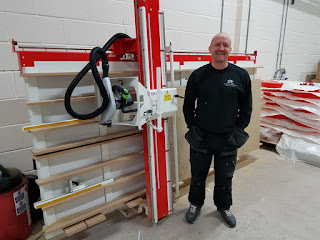 Why did they decide to purchase a Vertical Panel Saw? Millmerran aren’t Sagetech’s traditional customer as they provide a variety of services so the team was intrigued when the enquiry came through. This particular enquiry was for a machine that could cut fire doors which were needed for their sister company Doorwaytech. They were currently using a circular saw but felt that this was no longer working for them due to their demand and as they needed to be cutting up to 55mm thickness and sizing door blanks approximately 2100mm by 900mm, they decided on a KK12.

How did they find the sales and installation process?  They could not Fault. The contact from Millmerran stated that “we had seen the ex-demo KK12 machine advertised on the website and normally I have just missed something that I want, so when I called, I was in luck that it was still for sale.” They dealt with Phil who discussed their requirements and talked them through the full package, including the warranty, delivery, installation and training. They were concerned that being based in Devon, delivery may have been a problem however their concerns were put at ease when Phil explained that Sagetech deliver all over the UK and Europe.

How has a Vertical Saw benefitted them and their business? Once Millmerran knew that they would be having the machine installed, they saved their remaining orders to cut once the new machine was ready. As soon as the machines install and training had been completed, they were able to get underway with their backlog of orders. As the machine allows for a one man operation, it makes it a lot simpler to have one person on the machine and being able to check up on the work to ensure everything is going according to plan. They have been able to increase their production due to the quickness of the machine against their older circular saw. “We are over the moon with the package that we have received from Sagetech Machinery. We have been able to purchase a pretty much brand new saw for the price of an ex demo machine” stated Millmerran.